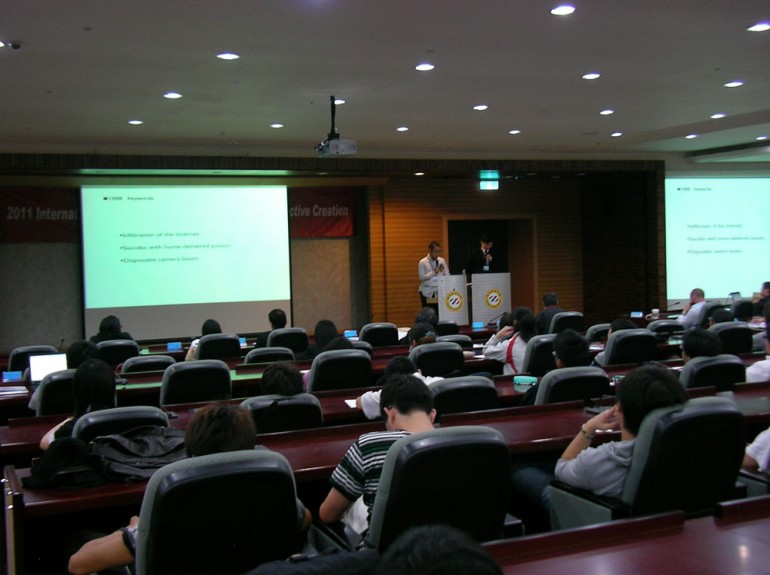 1. Introduction
There are various ways in expressions of art, and my objective is to capture and to present what is happening in reality like data base and systems do. Like a painter who draws a contour line that does not exist in reality, I would like to give an outline to the technology and media that exist now. Living the modern Japanese life, how I capture the information and the technology is important since they could affect my daily life in a big way.Firstly, I was raised by manga, anime, and computer games, and I gained my life values from them. As I turn adult, fine art joined these authorities. They say your life values get enriched through encountering others, and I made friends with classmates designated by the education system as a child, and today I put them on my Facebook. I try stopping my friend from committing suicide through Skype, and I will never be able to get to the shop recommended by an acquaintance’s tweet without a help of the GPS. And of course I check the rating of the shop’s reputation at the recommending website. My personal experience of a temporal but total blindness in my life had forced me to face the technology of “seeing,” to become serious about painting, taking photographs, and communicating about images. I also thought deeply about medical technology and morality when I found out that I had an inborn spinal injury, which could have been a subject to selective abortion according to the antepartum genetic diagnosis technology of today. The “Life” directory is placed within the “Technology” directory, and I would like to put them all in the home directory of “Art,” because I would like to live thinking about and trying out what is beautiful. It may sound cynical, but if I were to show the title in UNIX address, it will be “/~art/technology/life,” and to determine what should be in the “Life” directory and what the root directory should be, are the concepts of my work creation.
In following, I would like to introduce some works and keywords to go with them sorted by years.

3.Collective projects
■2002 “the House of Dolls -from human shape to figurine-” Kyoto University of Art and Design Gallery Raku
A collaboration project with Mr. Amano Kazuo on exhibition of dolls. I took charge in contemporary figurines. Fashionable dress-up dolls targeted at adult women and action figures of movie stars, Tetsuwan Atom (Astro boy), made with realistic details to look like a real-life human boy, and Real dolls, created as a sex toy were some of the many dolls exhibited in the University museum.
Keywords: releases of the Xbox, Final Fantasy 11, human genome analysis completed (2003)
■2004 “project AYA” Yamaguchi Center for Arts and Media
A collaboration with a French media performance director, Ms. Keiko Courdy. I performed as a system and visual interface creator and a chat actor. The story develops around the chat with the audience. It is a science fiction depicting the environment in the future, when human race has progressed into the space and the consciousness and the body are separated. It takes a form of a stage performance, but contains a lot of interactive factors, which allows other performers who shared the vision, DJ’s, VJ’s, chat actors and dancers to join in improvisational expression.
Keywords: P2P (the creator of Winny arrested), release of the Play Station Portable
■2006 “Net Water” renkon.org, Kyoto University of Art and Design, Xilinhot (China)
A collaboration workshop class with Ms. Keiko Courdy at the Kyoto University of Art and Design. I took charge in system operation and broadcasting from Mongolia. It was an installation/performance that connected an introverted man who lives in the neighborhood of where the workshop was held and an Inner Mongolian family that makes a living off of a traditional Mongolian folk art via video chat. The audience in the lecture hall can use a simple communication tool that utilizes the camera function of their mobile phone to guide the introverted man to contact the eldest daughter in Inner Mongolia.
Keywords: releases of Wii, PlayStation 3, Hikikomori (people withdrawing from the society) now counted up to 1.6 million (NHK Welfare Network research, 2005)