▼Introduction: Video Game Matters in Japan
Play Station 2, Play Station 3, Xbox360, Wii, Nintendo DS, and Play Station Portable are video games which are currently in use in Japan. Compared to consumer games, computer games have a minor market share, and are strongly affected by derivative consumer games like Final Fantasy 11 and Monster Hunter Frontier. These days, serious games with practical applications, like brain training games on Nintendo DS, are penetrating the market, but here I refer to “video games” as those which have been structured by stories, and so here I want to consider the ways in which the user perceives how the manner of interaction changes in various video game media. After the success of Nintendo DS and Wii, consumer games are becoming so popular that we can’t ignore them in Japan, and discovering how to users can follow the story will become increasingly important in the future. FPS games are less popular in Japan than in the West, and RPG games are the most popular in Japan. For teenagers to those aged in their thirties, RPG games are in a strong position as a medium of communicating stories, in the same way as Japanese animation, comics, and novels. Having been greatly affected by Dragon Quest series and Final Fantasy series, RPG games are mainly set in Europe in the Middle Ages, and they are sheer fantasy. RPG Command input RPG games are mainstream games that anyone can do; in short, anyone can follow the entire story if they take enough time. The characters, in the game, rather than the users themselves, can develop according to the user’s input. FPS(TPS) The story and the manipulation by the user occur simultaneously; the story is played out from the position of the user rather than from a bird’s -eye view from above. The story progresses as the players become more skilled, and individual differences between the players become apparent. Therefore the rivalry among players grows, and FPS games and network games are compatible. RPG games, which occupy a strong position in story media among Japanese youth, are currently differentiated into special groups, like OTAKU cultural animations. The Final Fantasy series and the Dragon Quest series are regarded to be orthodox RPG games. However the latest Final Fantasy 13, will have a range of different titles and will share the same background settings but will have different stories and systems, and the latest Dragon Quest 9, although formerly the game could only be playedby one player, or several players.

▼SRPG
SRPG is like Shogi (a Japanese version of chess) in that every piece represents a character, a uniquely Japanese video game genre. Focusing on SRPG enables many characters to be pieces in the story world and enables them to talk equally (to communicate with the player). I will consider the potential of stories after the postmodern period in consumer games which are interactive communicative media. SRPG originated from the Fire Emblem series. It is still popular, so I will take it as an example. This series has a story that can be called the main story, but many players enjoy the individual stories of the many characters and the human relations created by those stories. Using units efficiently will help the players to win, so understanding each character’s personality is important. Mostly, players are cast not as heroes or heroines but as commanders that command all characters including the hero or heroine. Players sometimes are cast as the hero or heroine, but this is just for expedience. Players can bring their feeling to any character they want to, or just view the stories across the world like the Creator.

▼Viewpoints that SRPG presents
RPG and SRPG are different from other story media (comics or novels) because of “location”, “repetition”, and “quantity”. RPG the main story is represented on the vertical axis and the combat items on the horizontal axis. The position of the character is controled by the player, which is connected to the geographic location of the game and the progress of the story. For both of them, repetition of combats and missions will create value through experience, without which the story will not progress. SRPG puts a special emphasis on width and depth of combats or items on the horizontal axis (each character is treated like an item that can be regarded as both a pieces and a narrator) rather than the length of the main story. Players enjoy the story more with developing relations between characters. The various combinations of the characters will create various stories. For these reasons, selecting the characters according to the players’ styles affects the way the story is received, and also the way the story is played affects the progression of the story. Examples of Story Progression: •The character selected as one of the pieces killed in the combat, and the absence of the character changes the story. •According to the combination of the characters, the hidden facts about those characters, such as their blood relations, will be revealed and will change the story. •After the characters have been together for a long time during combat scenes, they feel love for each other and create new conversations or story that will change the the point or score that indicates their abilities.

▼The main examples of games of SRPG
Fire Emblem series, Nintendo, Its inception was in 1990 AThe latest work is scheduled to be released in the spring of 2008. The origin of the story is made by pieces; each piece begins to narrate a tale as the originator. Although there are a lot of games in which the character dies and comes back from the dead many times in the world of the game, a new system made a new possibility of empathy was created in which the character died and did not come back from the dead. Super Robot Wars series, BANPRESTO. Its inception was in 1991. 40 titles have been produced and they continue to be produced. Heroes from different stories feature; what they have in common is that they are all robots. They come to the new game coming equipped with the background of the original stories. The number of super heroes increased. They are brought together in the new story. It is like a meeting of the stars. Summon Night series, BANPRESTO. Its inception was in 2000. The latest work will come out in the spring of 2008. The story changes according to the frequency of the conversation between the hero and the subcharacters. Feelings (love, friendship, and love between master and pupil, etc.) are the axis of the story and they can ne changed by selecting the hero’s sex and the combination with the subcharacters. Disgaea: Hour of Darkness series, NIPPON ICHI SOFTWARE. Its inception was in 2003, The latest work will be released in 2008. The main story is not so important. The main enjoyment is improving the scores against enemies from both within the world and from other worlds. eg: You defeated the Damon world in the main story, but you develop the characters to the one millionth level to defeat the invaders from the Super Damon world. Moreover, it is important to know how to use the multipurpose characters who don’t have specific roles or personalities in the story .

▼Conclusion
The narrative style popular amongst young people in Japan is not linear, but is rather the accumulation of the stories that various characters have. In addition, in SRPG many players can decide how to use it, though it includes the metaphysical aspect of “Empathy”. Arguably SRPG is the opposite of “the kind of story that relates directly to our own lives”, which was the main narrative style until recent years. “Looking” at the “World” through the “Hero” (simplistically) has became difficult now.

▼Future Possiblities
Valkyria of the Battlefield, 2008 A new play aspect is presented by a combination of RPG, SRPG, and FPS in the combat parts. FINAL FANTASY CRYSTAL CHRONICLES The World of The Little King, Wii Ware, 2008 Software delivery on the network for Wii. The player becomes a king to develop the country and the story by giving orders to brave men, or by designing the city. ♢Footnotes In addition, advanced expressive forms of stories have appeared in recent years. Light-novel The illustrations of the cover and the inside the book are related to the novel, and many expressions from Japanese animations or comics are used. Cell phone novel It is a kind of novel that can be read using a cell phone. There are many unhappy themes in Japan, such as a misfortunate heroine using drugs, AIDS, and rape. Novel games Most of them are adventure games with pornography, but there are also a lot of experimental aspects such as repetition of the same story two or more times, and users have a choice as to how the story ends.

♢ Footnotes
In addition, advanced expressive forms of stories have appeared in recent years.
Light-novel
The illustrations of the cover and the inside the book are related to the novel, and many expressions from Japanese animations or comics are used.
Cell phone novel
It is a kind of novel that can be read using a cell phone. There are many unhappy themes in Japan, such as a misfortunate heroine using drugs, AIDS, and rape.
Novel games
Most of them are adventure games with pornography, but there are also a lot of experimental aspects such as repetition of the same story two or more times, and users have a choice as to how the story ends. 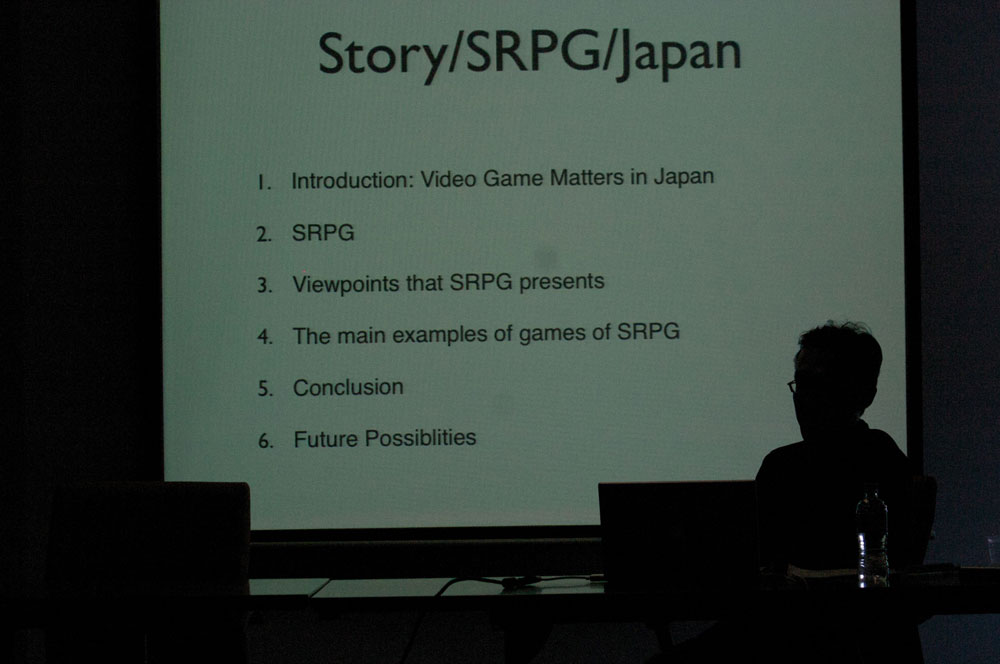 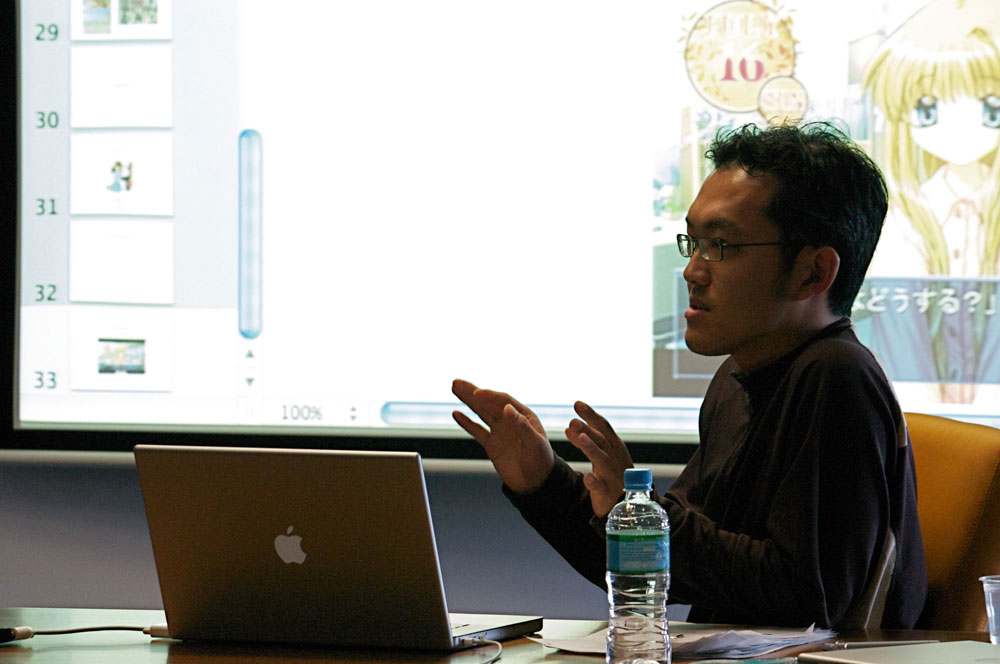